In January 1847 Harriet Ritchie answered door of her small cabin at Johnson’s Ranch (near today’s Wheatland, CA) and broke into tears at the sight of the spectral apparition before her.  William Eddy stood there supported by two Indians emaciated and exhausted. Others in the settlement would follow his bloody footprints back to find his six companions. They were all who were left of 15 members of the Forlorn Hope Party that had left Donner Lake in a quest to reach California and help for their friends and families still at the lake.This is their story.

The Donner Relief Expedition which will begin February 14th, 2022 on the 175th anniversary of the rescue of the Donner Party, builds upon 8 years of research – both from written word (diaries, journals, interviews with survivors, articles, novels, academic research, etc..) and in-the-field surveying. 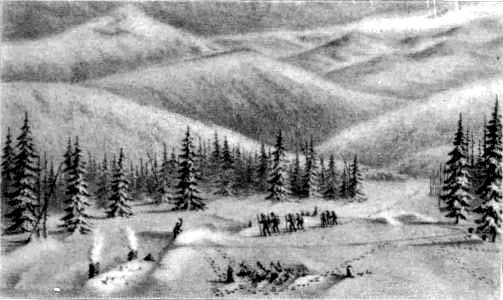 The Forlorn Hope’s arrival in California set off fund raising and a series of rescue parties and acts of heroism. In 2021 four extreme athletes did a reprise of the Forlorn Hope trek from Donner Lake to Johnson’s Ranch. That was only the first half of the story. In February of 2022, the same four will embark on another trek, this time reprising the rescue parties’ route from Johnson’s Ranch to Donner Lake.

People who could have easily stayed comfortably in California, with plenty of food went into the Sierra in the middle of winter to endure the hardship of carrying heavy packs uphill through the snow. They would endure hunger, cold, exhaustion, and the horror of seeing the camps at Donner Lake. Meanwhile the people trapped at the lake had been reduced to eating the ox hides reduced by boiling to “a pot of glue” according to Virginia Reed that had covered their inadequate cabins. The snow just kept falling.

The relief party shouted as they approached the end of the lake but there was nothing but snow fields. Then a head popped up out of the snow from a buried cabin, “Are you men from California or are you from heaven?” a woman asked. One rescuer said, “At sundown we reached the Cabins and found the people in great distress such as I have never witnessed there having been 12 deaths and more expected every hour the sign of us appeared to put life into their emaciated frames.”

The first relief party took thirty people, including the rescuers, leaving behind thirty-two. The next day Patty Reed (9) and Tommy Reed (5) returned to Donner Lake with two rescuers. They were too weak to go on. Imagine their mother’s choice; two of her four children could not go on.  Should she continue with the other two or go back to the lake? Could the oldest two survive the journey without her? Could the youngest two survive at the lake without her? Would they be given enough food to survive?  Patty said at parting, “Good-bye, Momma. If I don’t see you again, just do the best you can.”

It took two days to get over the summit. Ada Keseberg (age 3) died. Her father, Louis, was back the lake and could not travel. Two months later when he was rescued as part of the fourth relief party, and camped at the same spot, he reached into the snow to pull out a familiar looking piece of cloth – his daughter’s dress. It was the first time he learned of her demise. The first food cache had been destroyed by animals. John Denton died. The second cache had been destroyed by animals. There was no food. A rescuer later wrote that at noon “had a small divide of shoe-strings roasted and ate them and then proceeded about half mile when we met two men with provisions, we struck fire and feasted on our dry beef.”

What kind of men must the rescuers have been who heard the news that there was a party of emigrants trapped in the mountains and decided to join the various relief parties? It’s true that most were paid a few dollars a day but how much compensates for the discomfort, the danger, and the physical exhaustion; how much compensates for what they saw at Donner Lake?

What could induce them to leave home and opt for weeks of what must have been misery first dealing with rain at lower altitudes, then struggling through the snow sometimes sinking to their knees or thighs while carrying heavy packs. They must have sunk into the snow with each step even as they used the footsteps of the person in front. They slept sitting up on logs in the snow under blankets. They had little food. They should have had, as Sheriff George McKinstry wrote, “their names inscribed in letters of gold.”

On the 27th of February the second relief party met the first. It was led by James Reed who had been banished from the Donner Party months before after a knifing and gone ahead to California. In the first relief party he found his wife and two oldest children. He said, “I cannot describe the death like look they all had – ‘Bread Bread Bread’ was the begging of every child and grown person except my wife. I gave what I dared and left for the scene of desolation” at Donner Lake.  There on March 2nd he found his two other children. They were alive. Mrs. Reed’s gamble had paid off.

The first relief continued down the mountain. Some miles further on near Bear Valley, Virginia Reed said “We camped that night and ate the bread my father had brought for us. We were out of the snow, could see the blessed earth and green grass again. How beautiful it looked. We stayed a day or so, getting the horses and mules ready to ride. No more dragging over the snow, when we were tired, so very tired, but green grass, horses to ride, and plenty to eat.” William Hook, age twelve, died of overeating.

One hundred seventy-five years later, on the demisemiseptcentennial, of the first rescue party arriving at Donner Lake four extreme athletes will leave Johnson Ranch for Donner Lake carrying with them the story of those heroes of 1847. Almost everyone knows the general story of the Donner Party. This event on the 175th anniversary will highlight the best of the human spirit.

Like the original story this 2022 reprise is another compelling story. It is the story of four people who love challenges, love to push themselves to their limits, and are aficionados of history.

Extreme athletes, Bob Crowley, Tim Twietmeyer, Jennifer Hemmen and Elke Reimer will take on the challenge of crossing the Sierra in winter. The original treks by the rescuers were incredible but so is this 2022 trek for those of us who can’t conceive of doing anything like it. There is the driving curiosity to get some idea of what the Donner Part rescuers went through as they overcame obstacles. There is the appreciation of history and human nature in the struggle to save strangers. There is the “perseverance, endurance, toughness, passion and grit… focusing on the motivation, ruggedness and resilience of these ‘normal’ people who accomplished extraordinary feats and who embodied the core characteristics and tenets that became the backbone of America.”

There is also the opportunity to, as Bob Crowley says, to “honor and reflect upon those people who were willing to sacrifice in this selfless and desperate act.” 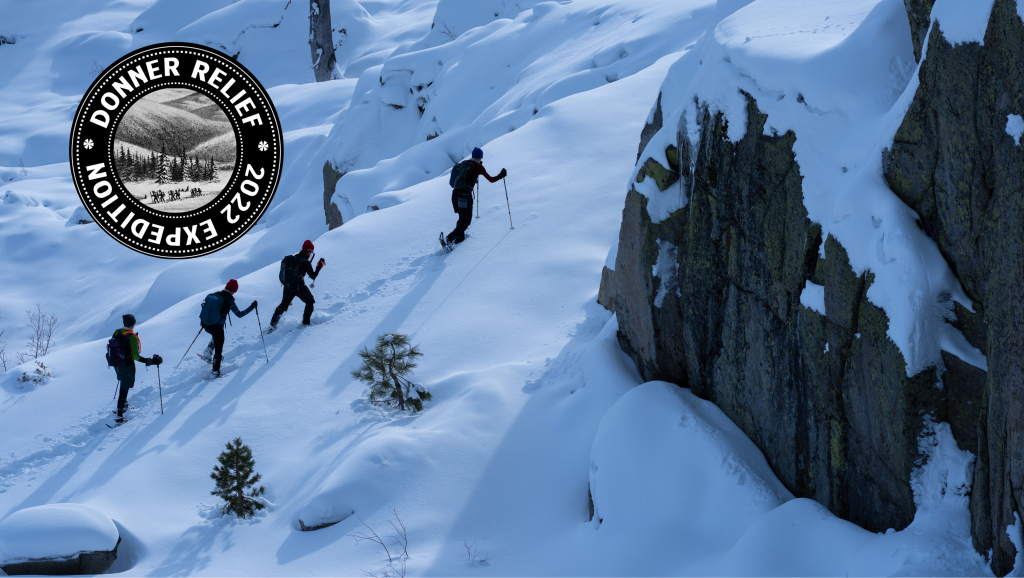