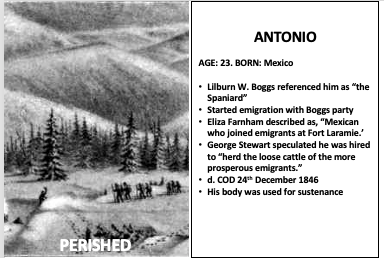 The second member of the Forlorn Hope to perish was Antonio, a 23 year-old Spaniard. Antonio was born in Mexico.

In April 1847, Lilburn W. Boggs numbered among the casualties of the Donner Party “Antonio the Spaniard that started with us.” In 1856 Eliza W. Farnham referred to him as, “a Mexican, who had joined the emigrants at Fort Laramie.”

Antonio’s role in the Donner Party has been debated; historian George R. Stewart suspected he had brought on as a hired hand to herd cattle of the Donner family, according to a letter by W. C. Graves.

December 16th, 1846 Antonio was one of the fifteen who departed with the Snowshoe Party (Forlorn Hope). He survived the first two weeks of the trek but by Christmas Eve he was far gone. He ultimately perished at the “Camp of Death” along with three other Forlorn Hope members. He was cannibalized by his companions. George Stewart wrote,

Antonio the Mexican was far gone. So was “Uncle Billy” Graves; his sixty years were telling. He was of no strength to bear up with men and women half his age, his own daughters among them. Perhaps it would be Antonio or “Uncle Billy.”   But they both managed to keep going, until at last all halted. The storm was blowing upon them what seemed an actual torrent of snow. In the gathering darkness, stumbling with weakness, having only one hatchet, with some of their number already collapsing, they found the task of collecting wood almost too much for them.

If those who had to cut and carry the logs for the firm platform chose skimpy ones, they were scarcely to be blamed; they did what their weakness allowed. Even after the green logs were laid together, the numb-fingered men had the greatest difficulty, as the wind swirled and the snow drove, in getting the fire kindled at all.   At last the flame lived; they cherished and built it up until it roared finely, their only cheer on Christmas Eve.   But some of them were far gone.

Antonio the Mexican, who had followed the train as herdsman of the cattle, lay by the fire sleeping in a heavy stupor. He breathed difficultly and unnaturally. Once as he moved in his sleep, he threw out an arm so that his hand fell into the fire. Eddy, lying nearby and awake, himself exhausted, saw what had happened, but supposed that the pain would arouse the sleeper, and in any case if Antonio were not aroused—so much the better. But the hand doubled up and shriveled with the heat, and finally Eddy, arousing himself, drew it from the fire.   Eddy lay down, but Antonio’s breathing became a rattling sound and he flung out his arm again; the watcher, realizing that nothing mattered any longer for Antonio, saw the hand shrivel in the flame until it burned to a coal. Cold, fatigue, and hunger had done their work.  Again there was food in camp, but before any one made a move to eat, a worse crisis was upon them. Antonio had died about nine o’clock, and an hour later the storm increased in fury.

In Search of Johnson’s Ranch