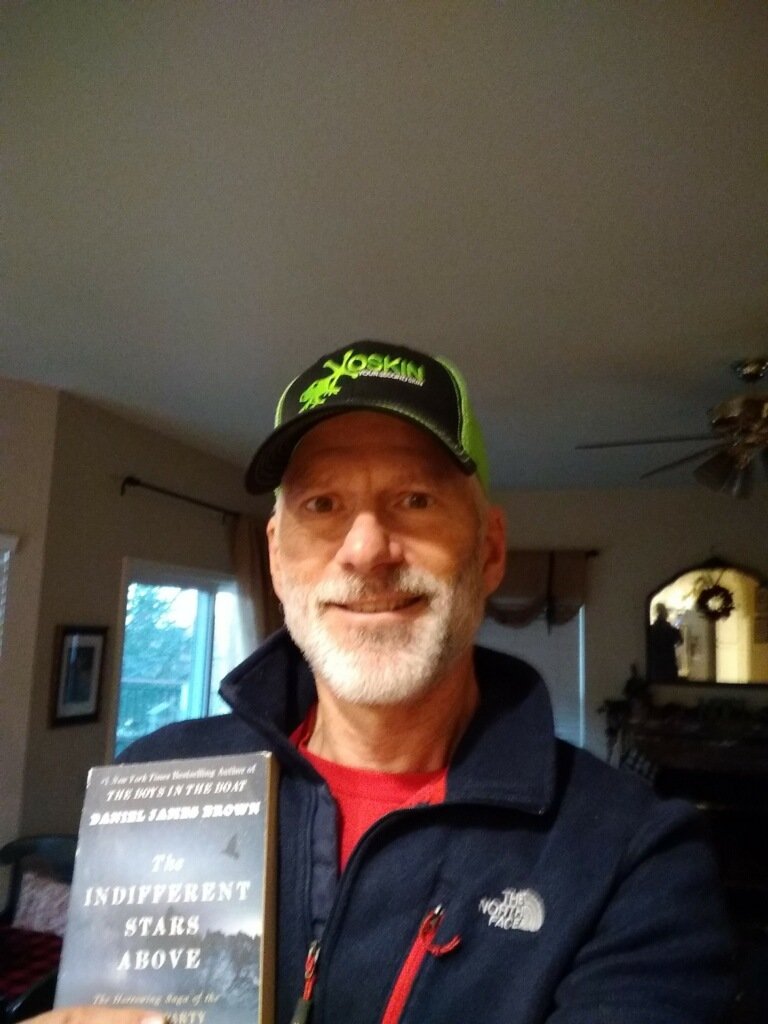 How do you get hooked into a story like the Forlorn Hope such that someday you want to try it yourself? Well, I’m blaming it all on Daniel James Brown, the author of The Indifferent Stars Above.

Several years ago I ran into a runner buddy of mine at the Auburn Dam Overlook and he had a copy of the book Seabiscuit. I’d known that the book was a bestseller, but could a book about a race horse be a real page-turner? Well, it was. I must’ve read the horse races in that book at least five times and each time I felt more like I was actually at those races. Laura Hillenbrand’s description of the match race between War Admiral and Seabiscuit made you feel like you were actually there with the rest of the throng on the infield of the track.

That brings me to Christmas a few years ago when my family gifted me the book Boys in the Boat. I had the same reaction to this bestselling book as I did to Seabiscuit. Meh, really? A story about rowing is really gripping? Well, it was. I particularly resonated with how Brown describes the ‘swing’ of the boat, when all the rowers are in perfect harmony, the oars turning at the perfect pace and hitting the water in unison. It reminded me of trail running when you’re hammering down some beautiful single-track and everything is working, the mind, the lungs, and the legs, all in perfect harmony. After finishing Boys in the Boat, I was hooked on narrative nonfiction. And following the old adage ‘if some is good, more is better’, I searched for what else Brown had written and found The Indifferent Stars Above and Under a Flaming Sky.  I immediately ordered both books.

I dove into The Indifferent Stars Above as I wanted to learn more about the Donner Party as I generally knew much of the terrain near Donner Summit as my family owns a cabin in Soda Springs and the Overland Emigrant Route crosses Soda Springs Road about a quarter mile from the cabin.  In the summer I started finding the T-markers that mark the way of the Truckee River Route about every three or four miles from the Humboldt Sink in the Nevada Desert to Johnson’s Ranch just outside of modern-day Wheatland, a small farming town north of Sacramento. I was starting to knit-together the route on which the emigrants traveled.

But what really drew me to the book was the Forlorn Hope and Franklin Graves. When I finished The Indifferent Stars Above, I was 57, about the same age as Franklin when he crafted the snowshoes and helped lead the bunch over the pass. Thirty years the senior of anyone else in the group yet he was the difference maker. On other attempts, they had made it over the pass, more than once, only to retreat due to the difficulty of travelling across the deep snow. Had Franklin not had the skills to craft those snowshoes, the story would have ended much differently. Then, when he knows his fate has been determined, and he’s done everything possible to save his family, he tells his daughters to do whatever is necessary to carry on.  It reminds me of the movie, Glory ,when Colonel Shaw stands at the ready in front of his troops and the flag-bearer and asks, “and if this man should fall, who will lift the flag and carry on?” Much like Thomas in Glory, Sarah and Mary Ann picked up the Graves flag and carried it forward such that their brothers and sisters could be saved back at the lake.

Once through The Indifferent Stars Above, it was on to George Stewart’s, Ordeal by Hunger, and Rarick’s Desperate Passage, and Wallis’ The Best Land Under Heaven yet while reading those, it was always the Forlorn Hope that was most intriguing. While most of the focus is on the mistakes the Donner Party made along the way, it seemed the Forlorn Hope was more of a secondary story. Not for us. As athletes and trail aficionados it’s the part that intrigued us the most. How did they persevere with little food, miserable weather conditions and the uncertainty of the route? What kept them going when everything was stacked against them? We hope by following in their footsteps that we can get a better appreciation for what they faced, how they coped, and change the narrative of the Donner Party story from one of mistakes, bad luck, and controversy to one of desire, grit, and an unwavering will to continue when the fate of the families at the lake depends on the Forlorn Hope’s success.

Donner Party History (1879) Author Lives On Through the Generations