Skip to content
Missed the Expedition? No worries! Head over to our Facebook page to join the ongoing discussion now>>>>> 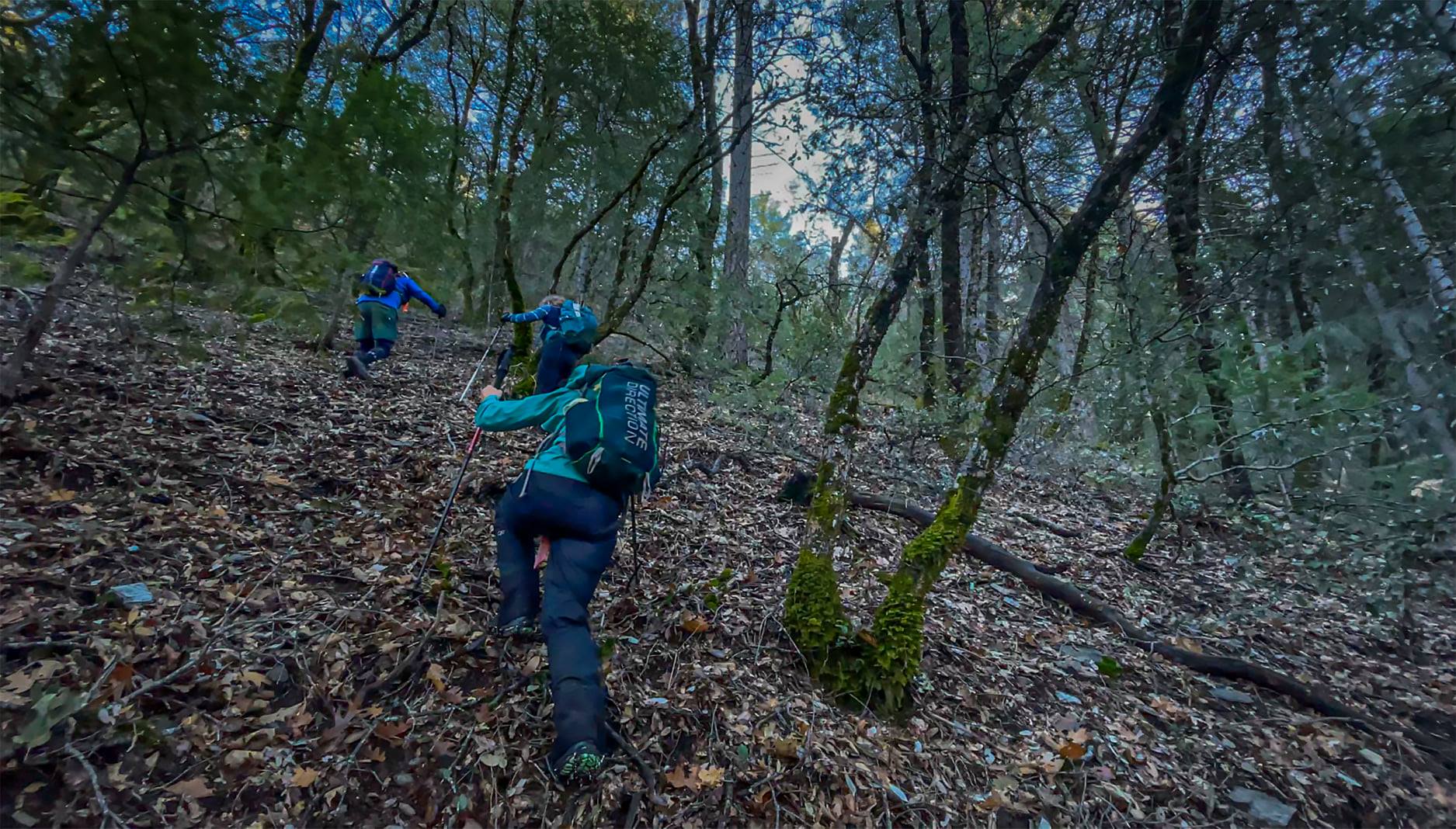 Forlorn Hope Expedition, climbing, 12-18-20, photo by Keith Sutter.
Day 1 was “Hope”,
Day 2 “Forlorn”,
Day 3 “Despair”
and Day 4…
Day 4: PEAKS AND VALLEYS
We traveled 21 miles in one day, it took Forlorn Hope 7 days to reach the same place.
Forlorn Hope had glimpsed the Sacramento Valley from atop Sawtooth Ridge, literally peaking their hopes that their destination was in sight, yet still far away. But in order to reach their quest they must descend 2,000’ to the North Fork of the American River down a steep slope.
They slid on their snowshoes and arrived at the river bank in haste. Their they camped and restored energy, for on New Year’s Day, 1847, they must ascend the eastern wall of the canyon starting with a sheer 500’ rock wall followed by nearly 1.5 miles of a 40% grade hill covered in thick brush, manzanita and treacherous rock outcropping.
On January 1 they began their assault on the mountain. It took them an entire day to traverse 1.5 miles. They were spent at the summit and set camp. It’s hard to imagine how steep 40% grade is; think of a square and slice it diagonally in half. The remaining hypotenuse is 45%. Treadmills typically go to max 12% grade. It’s daunting.
In the ensuing days they slowly moved westward along the Foresthill Divide with a bearing towards Iowa Hill. Eddy had tipped off Luis and Salvador to run away as Foster had begun to become unhinged with hunger, threatening to kill the two Miwoks for sustenance. Eddy and Mary Ann Graves encountered a deer which they hunted and killed, just as Jay Fosdick perished in his bride Sarah’s arms.
With provisions they regained strength and pressed onward to the WNW as the river bent sharply 90 degrees to the east. Down to the river again, across and up another 1,500’ climb to today’s Colfax. They were seven as Luis and Salvador had heeded Eddy’s warning and set out on their own.
Upon reaching the Bear River the troupe saw bloody human footprints. Foster was uncontrollable now. He followed the steps to a creek and spied the two Miwok boys lying prostrate, near dead. After a scuffle with Eddy, Foster resolved to finish them off. Two bullets later the deed was done as the rest of the party turned their backs to the horror. At the time this type of incident was not breaking a law, thus Foster was neither proven guilty nor prosecuted.
Soon thereafter the seven encountered more human tracks. Following them led to a Nisenan (Maidu) settlement along the Bear River. They were fed acorns, acorn bread and rested. It appeared they just might make it to Johnson’s Ranch some 30 miles away. But the weeks of starvation, physical exhaustion, mental debilitation and emotional trauma had taken its toll. The seven were now reduced to crawling and staggering…
Reflections
We broke camp at Iowa Hill to a chilly morning and immediately descended to the NFAR 1,500’ below using the trail Forlorn Hope likely utilized. The Steven’s Trail East was established as a toll “road” in 1850. But the narrow single track trail is treacherous and in great disrepair. We had to carefully avoid fallen trees, disintegrating dirt and rock infrastructure and slick rock outcroppings.
The river crossing was brisk at 8am and more dangerous than yesterday’s crossing further upstream. Here the water was swift and wide. We locked arms to form a human chain and slowly inched across the mossy rocks beneath our feet.
Now chilled to the bone we quickly ascended toward the sun which was striking the west wall above us. We moved as quickly as possible like moths to a light, seeking the warmth of the fresh sunlight. Soon we were rewarded and warmed as we basked in a delightful sight of fog lifting gently above the river below. It moved us greatly.
Forlorn Hope has crossed the river possibly on an ice bridge but we are uncertain. They were accustomed to many river crossings it’s also possible this was trivial for them – but not us! Another example of their grit.
From Colfax we headed toward the Bear River, crossed it without incident over a road bridge and remained on the road all the way to nearly highway 49. We were on the northern outskirts of Auburn where we set camp for nite 4.
We were spirited with our day, which had gone well. No one was injured, the river crossings, steep climbs and manzanita, white thorn, deep snow and frigid temperatures behind us. And just one day to go.
Forlorn Hope at this point we’re destroyed. Wrecked.
They’d come so far, endured unmentionable horrors and obstacles and yet here they were, 27 days into their journey, crestfallen with guilt, despair, exhaustion. Yet so, so close to their destination. Oh the peaks and valleys they endured. When would it all be over? When would they reach help for those back at the lake? And what would become of their families and loved ones? Had they been able to persevere and survive? What would they find upon returning? Would they ever, could they ever see them again? This chapter closes but not the story…tomorrow day 5.
[footnote: as I write this journal a deer has appeared and stands 10 feet from me, foraging. Now another. They stare directly into my eyes, unafraid. Eddy and MaryAnn sending me karma? They linger and I have a chill down my spine…]
Tags: Donner Party, Donner Pass, Donner Summit, Donner Summit Historical Society, Forlorn Hope, Forlorn Hope Expedition, Forlorn Hope Party