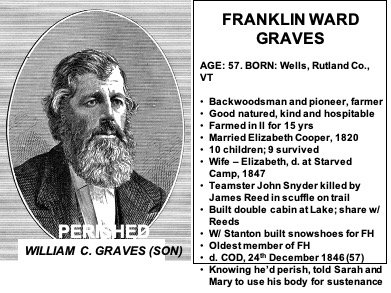 Franklin Graves was born in the Green Mountains near Wells, Rutland County, Vermont abt 1789. He was raised an authentic backswoodsman, hearty New Englander.

In 1866 Philip Lynch, the editor of the Gold Hill News, wrote about the Donner party, mentioning that he had known “Uncle Billy” Graves back in Illinois. Based on this statement, George R. Stewart often referred to Franklin Ward Graves of the Donner Party as “Uncle Billy” in Ordeal by Hunger, and many subsequent writers have followed his lead. But family sources indicate that the Donner Party Graves was called “Uncle Ward.”

Like many Vermonters, Franklin embraced the outdoors and his freedom. In summer he went shoeless, hatless and coatless, his long coarse hair his only protection. He was a man of large frame, good natured, hospitable and ever ready to do a kindness.

Graves has been referred to as, “more hunter than farmer.”

Graves’ motivation  to emigrate to California are unclear, but being a bit of a vagabond and Illinois’ unhealthy climate were likely factors. Possibly it was because Franklin regarded California as “the best wheat country”,  as noted by L. P. Bates in 1867.

In August the Graveses overtook and subsequently joined the Donner Party in what is now Utah.

When the party realized they would have to spend the winter in the mountains, Graves built his cabin about half a mile from the Breens and Murphys at the east end of Truckee (Donner) Lake. It was a double structure, with his family living in one end, the Reeds in the other, and a “well-chinked” partition between.

Franklin Ward was the only member of the Donner Party who was familiar with snowshoes. He and Charles Stanton contrived several pairs from oxbows and rawhide, which enabled the members of the Forlorn Hope to leave the camps and seek help from the California settlements.

Within Forlorn Hope were several Graves: his daughters Mary Ann and Sarah, and Sarah’s husband Jay Fosdick. Franklin was by far the eldest member of Forlorn Hope.

After ten days, the snowshoers were out of provisions; then a blizzard struck, creating untold misery for the starving travelers. Graves, knowing he was dying, committed the most selfless act of all – he died so those he loved could live. Graves urged his daughters to use his body for food.

Lessons Learned in Person and on the Ground