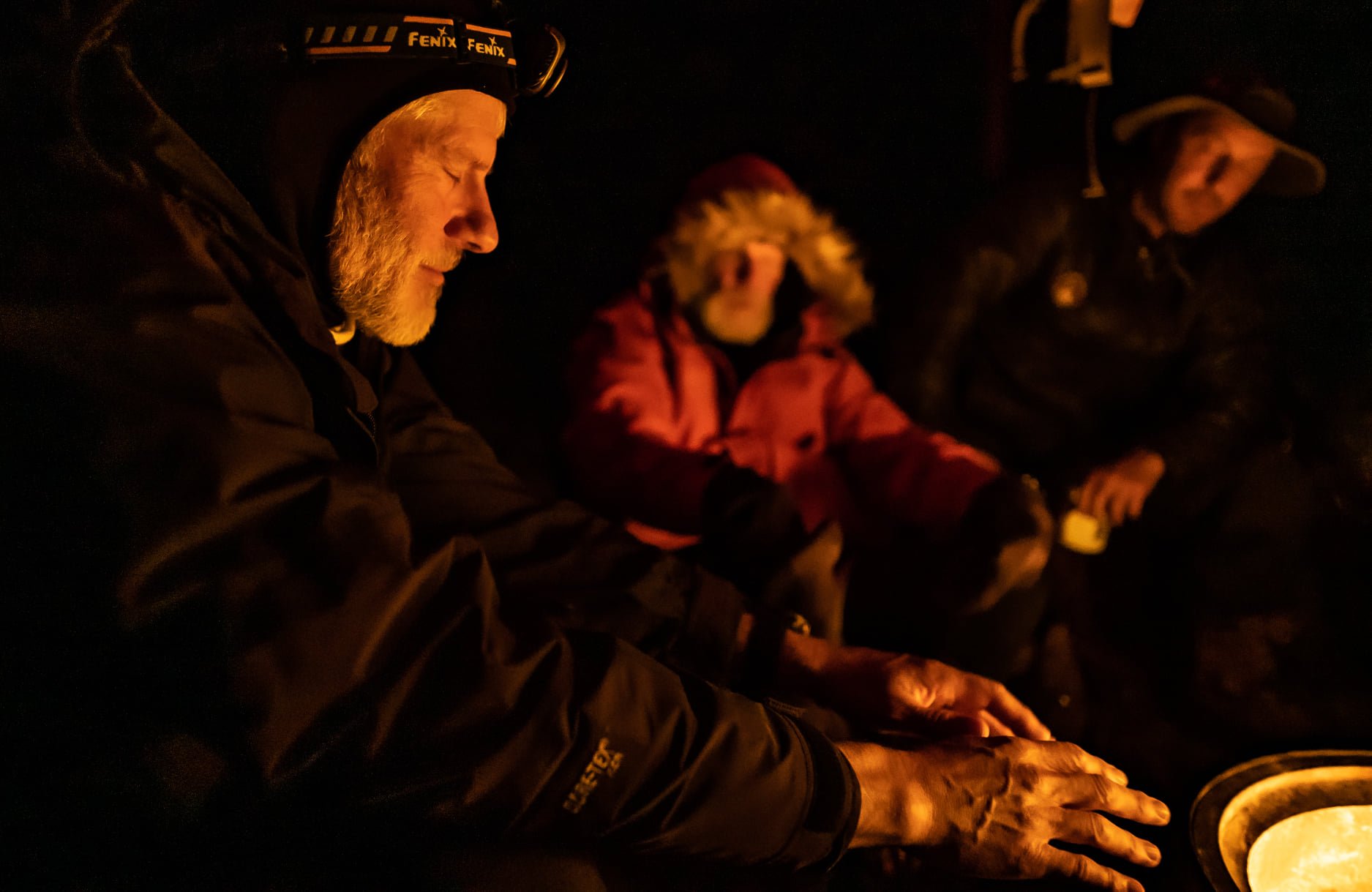 Forlorn Hope Expedition, around the campfire, 12-18-20, photo by Keith Sutter.

We traveled 14 miles in one day, it took Forlorn Hope 6 days to reach the same place.

Stanton had become snowblind and exhausted. He’d traveled over 200 miles back and forth across the Sierra to retrieve much needed provisions for the Donner Party and then led four separate attempts to escape Truckee (Donner) Lake, all which failed. And now Forlorn Hope.

He could go no further and as the troupe began to leave camp on their day 5, he commented, “I’ll be along”, as he leaned against a conifer, smoking his pike with his favorite tobacco. He was never seen alive again.

It wasn’t long before all the hope was drained from the party and replaced with forlorn. It slowly dawned on each member their leader wasn’t coming back and the two young Native American Miwok guides were unfamiliar with the way west to Johnson’s Ranch.

They hoped they were still on the right path but as the days – and another blizzard worn on, their fate became as unclear as the dark gray above. Blinded by snow and cold rain, their terrain became obscured and flattered, unable to differentiate hill from valley, east from west. They were most surely lost.

Unbeknownst to them, they trekked past the critical path bearing to the northwest at Carpenter’s Flat. And followed the easiest path as the earth sloped gently down to the southeast – precisely 180 degrees in the wrong direction.

Then derision came forth. Arguments over whether to go back, how to satiate their starvation, disagreement over the right way forward. Hope no more. This was full on forlorn and it was just the beginning…

We arose very early at Big Bend to discover 6” of new snow covering our tents. We’d heard the pitter patter of rain as we drifted to sleep the night before but then it stopped. We realized in our arousal that it hadn’t stopped at all, but turned to powdery snow which gently and quietly blanketed our sleeping quarters and the ground around us.

This new develop was going to change our plans for where we camp on night 3. So we crafted a plan A, B, C and D in the dark just before dawn. We would be prepared for the worst and hope for the best.

All proceeded as planned, albeit in deep snow and wearing snowshoes when we’d thought we’d be on solid ground. That was until we reached Six Mile Valley. Tim and I had scouted this leg of the journey a few years ago in April, when there was still snow on the ground. It truly was a straight forward hike, with gentle terrain wedged between two ridges. A bit swampy in places but straight forward.

So we set the expectation with Elke and Jennifer that this was going to be a pleasant hike where we could recover from the long and steep day before, gain more air in our lungs with decreasing altitude and save our energy for day 3 which would be by far our most challenge leg.

Almost immediately upon entering the Valley we discovered it was covered in white thorn…everywhere. Thick, bushy, dense quantities. This stuff is the bane of all hikers. It is like combining manzanita and blackberry bushes together into a super-shrub-trauma-maker.

For the next three and a half hours we trudged, slashed, chopped, smashed, tromped and tripped our way through this awful mess. We progressed 2 miles in 3.5 hours. Easy day no more! Ugh. Unkind words may have been uttered. Elke could be heard yelling, “Man down!” Every time Bob (me) tripped and fell flat. Karma had flipped. What had we done wrong to deserve this? Too many dad jokes at the prior night’s campfire?

We of course survived and with torn gear and bruised egos we emerged to meet our crew who’d wondered if indeed we’d gotten lost at the “Wrong Turn”.

That delay combined with the snow altered our camp 2 location. We selected a spot that shielded us more from the elements, 2 miles before our planned site, adding two more miles to what would already be a very long day 3. But we needed to rest, have time to dry our soaked clothes over the fire and regroup.

That evening we reviewed the day and reflected upon the Forlorn Hope. Had they encountered the same difficulties we experienced? Unlikely as there had been no mention of the white thorn in any accounts. We figured either the white thorn has grow more recently after a fire, of it was buried deep beneath snow when Forlorn Hope traverses the valley. We reflected upon the fact that there “were no easy days for Forlorn Hope” – nor for the Expedition…

An Open Letter to the Forlorn Hope Expedition