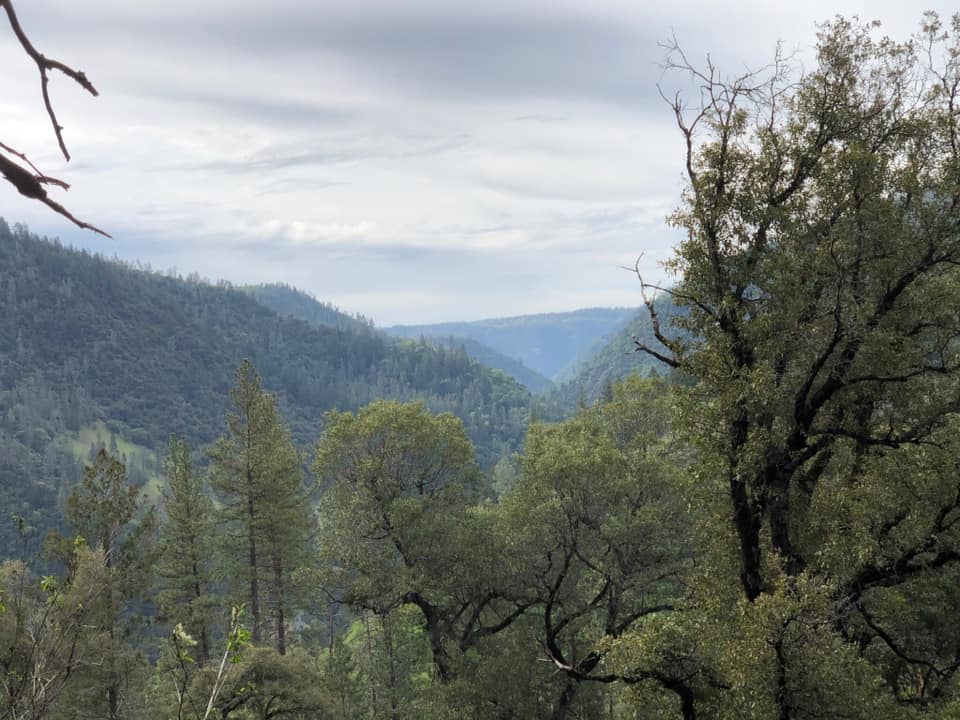 We traveled 26 miles in one day, it took Forlorn Hope 8 days to reach the same place.

Over the next 8 days, five members of Forlorn Hope would perish. On Christmas Eve and Day, Antonio and Franklin Graves are the first to succumb to hypothermia and exhaustion. Next Camp of Death would claim Patrick Dolan and young (age 12) Lemuel Murphy. What a horrendous place to be trapped by a raging snowstorm, no fire, chilled to the bone, surrounded by death.

Days later the sorry troupe emerged and pressed on, completely lost and having crossed the thin veil of civility.

Yet Fate wasn’t through with this band of pioneers. After emerging from Burnett Canyon and cresting Sawtooth Ridge, they managed their way along heading generally WNW. Then it happened. As they rounded a corner, to their left the thick forest of trees opened briefly to reveal a most magnificent view: the Sacramento Valley! Oh sweet Lord, we see our destination. 15 days after departing the lake they’d laid eyes upon terrain that was green and lush – the promised land they had sacrificed so much to see. Now it laid before them, many, many miles and canyons away. How their emotions must have swung from euphoria for the sight to despair for the massive distance they still must travel…

The morning was frigid. We’d hung out wet clothes by the fire all nite before. Most was dry, some not so much. But we must get an early start for what would be our most challenging day: crossing the North Fork of the American River canyon.

As we descended upon Camp of Death we paused and stood silent in a moment of prayer and reflection. How could we begin to understand the sacrifices these souls made on behalf of their families and the future of American society?

15 minutes later we reached the bottom of Burnett Canyon and filled our water bottles from the stream. As we reached the crest of Burnett on the east side, opposite Camp of Death, I realized I’d lost my phone. I decided to try and retrace our steps in the snow in a hopeless search. As it became clear I’d never locate it, something on the ground caught my eye, semi-buried in the snow. It was the GPS tracker! I hadn’t even realized I’d lost it too. I was overwhelmed with a feeling of joy and serenity. This was most definitely a sign. I sensed Franklin Graves whispering to me, “I’ll keep the phone for future communications but you take the tracker and carry on with your journey.”

As we began our descent from Sawtooth Ridge into the jagged jaws of NFAR, another sign: we came upon a dead deer right in the middle of our trail. What in the…

In all the years we’ve been scouting in the North Fork (NFAR), we’d never encountered any large animals. Now this. Was it a sign from William Eddy, who’d hunted a deer across the canyon where we were heading?

The most daunting portion of the Expedition loomed before us. We began our ascent up the “steep climb” which measures 1.5 miles, at a 40% slope and nearly 2,000’ of elevation gain. We tried to find a rhythm, a few steps digging our toes into the moist dirt followed by a brief rest to catch our breath. Then repeat over and over. We finally emerged onto Elliot Ranch Road 80 minutes later. It was exhilarating to be done. We were exhausted, dripping in sweat. And dumbfounded. How could Forlorn Hope possibly have done this, exhausted, broken, no equipment, famished? Our awe for their tenacity, determination and grit grew yet again.

We arrived in the dark at Iowa Hill, ready for a quick meal and sleep. We were feeling the impact of three straight days of arduous travel. And the NFAR only ground us down a bit more.

To bed after sharing our reflections of the day around the campfire. One could hear the synchronized snoring from several tents.

Gearing Up for the Expedition