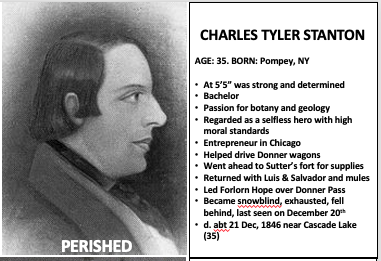 Charles Stanton is regarded by many as one of the “heroes” of the Donner Party. A bachelor with no particular incentive to take extraordinary risks, he volunteered to ride ahead and secure much needed provisions from Sutter Fort for the entire Donner Party on its way to the Sierra and California. Indeed he returned, with said provisions along with mules and two Miwok Indian guides, Luis and Salvador. Without there extra provisions the Donner Party would surely have had members perish prematurely.

After several failed attempts to cross back over the Sierra again, Stanton volunteered to lead the Snowshoe Party (later renamed the Forlorn Hope by C.F. McGlashan) of seventeen to try and cross the Sierra in the dead of winter to seek help from Sutter’s Fort to rescue the 87 party members trapped at Donner Lake by snow and cold.

Stanton, exhausted from the double crossing and extra attempts became snow blinded and after 6 days, could go no further.

The morning of their sixth day broke. It was Monday, the twenty-first of December, the shortest day of the year. Christmas week! That morning Eddy dug into his little pack to see if there were not something which he could leave behind to lighten his load still further. To his amazement he found half a pound of bear’s meat. To it was attached a bit of paper bearing a note written in pencil and signed “Your own dear Eleanor.” She had robbed her own insufficient stores to save her husband, and in the note she urged him to cherish her gift for the last extremity; some feeling told her, she wrote, that it would be the means of saving his life.

But by this sixth morning one member of the company was finished. Little Stanton, who had once been in the warm, safe valley of the Sacramento, who had come back that the women and children might be fed, who had three times led the way across the pass in the snow—Stanton was through. Fatigue, snow-blindness, and slow starvation had worn him down. He had made his mistakes, but he had lived as a hero; it remained to die as a gentleman.

That morning as his companions were setting out, he sat by the camp-fire smoking his pipe. Mary Graves approached, and asked if he was coming. “Yes,” he said, “I am coming soon.” They went on. Stanton’s chivalry had spared them any qualms about deserting him.

Nevertheless his loss almost immediately brought difficulties. He had doubtless trusted to the Indians to guide them through, but to follow an unmarked trail across snow-covered mountains, especially when they had traversed it only once before and then in the opposite direction, was entirely too much of a task for these half-civilized Indians of the plains.

Moreover this section of the trail followed no river course or marked ridge, but worked along and across the valleys of small streams. Each of these began by flowing west and looked as if offering the proper route, but they all soon bore off subtly to the south, leading not toward Bear Valley, only a day’s march distant, but toward the canyon scarred, tangled country along the American. It was a perfect place for getting lost.

And almost immediately they made a mistake.

Instead of keeping well up on the slope and working along it, they turned off and went downhill toward the south and away from Bear Valley. On this day they used up the last of their provisions. At night Stanton did not come in.